Stay up to date with product releases and latest news by signing up for our newsletter.

Brantford, Ontario has a new claim to fame besides being the native home of NHL legend Wayne Gretzky. The Brantford Airport is home to an aircraft maintenance facility that is the world's first 100 per cent off-grid facility. The technology permitting the off-grid power was supplied by Canadian Energy.

The hangar is a building-integrated photovoltaic (PV) project that features a lightweight and portable building structure that covers 40,000 square feet with a 50 kW solar PV rooftop system, integrated directly onto the roofing.

The technology used by Canadian Energy comprises of a load-shifting battery and power control system, packaged in a shipping container, to permit 100% off-grid power in the building, with diesel back-up available.

Craig Ballard, chief executive officer at Canadian Energy, says the team took an innovative and creative approach to achieve the outstanding results. It used existing commercial elements and integrated them into a pre-engineered building that meets all government code requirements for a regulated, urban airport setting. "The project meets the robust reliability needs of an off-grid, remote set up," he says.

"The inverters were set-up in a hybrid configuration that allows for the seamless operation of solar along with the back-up generator, extending the autonomy of the system," says Ballard.

The hangar is a prototype but its success demonstrates similar pre-engineered buildings with integrated PV can be easily and cost-effectively deployed in remote communities.

More importantly, the project exemplifies the importance and benefits of solar energy. While few incentives exist for installing solar energy in remote setting, the need for reliable diesel-independent power in Canada’s remote regions is high. The Brantford project delivers reliable power at less than $0.50/kWh and illustrates quality work-or-living space can be built below the cost of conventional per square foot metrics.

The off-grid project, powered by Canadian Energy technology, has brought new growth and energy to a sleepy but important aviation site. Yes, Brantford will forever be remembered as Gretzky’s hometown to hockey fans worldwide, but now with the world's first 100 per cent off-grid aircraft hangar, the city now showcases the special accomplishments of the Canadian solar energy industry.

“This renewable project positions Canada as a leader in the global race in adapting PV to remote settings,” says Ballard.

Canadian Energy won the Game Changer Award, presented by Canadian Solar Industries Association, in the category of Solar PV Project of the Year in 2016.

This project was a collaborative joint-venture between Canadian Energy, Legacy Building Solutions and Solar Ship Inc. Visit the project page for more information about materials used, location and lots more. 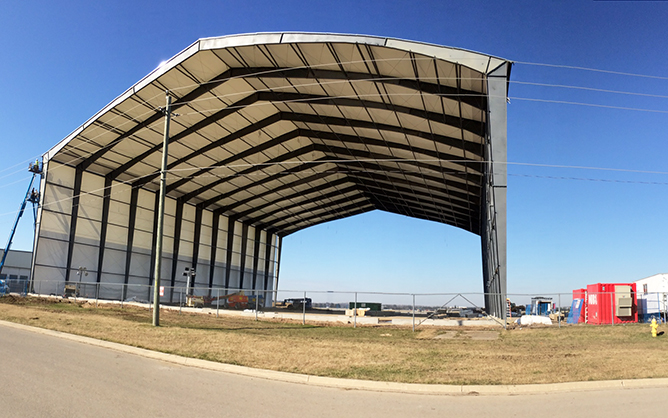 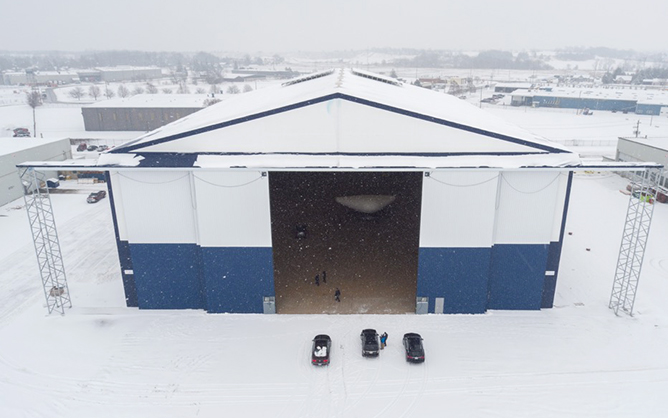 Proud members of the following organizations: